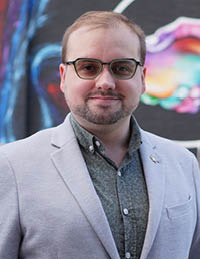 As Atlantic Canada’s Manager of Partner Relations Schuyler will be working with our Employee Partners, building engaging and supportive relationships as we work together to build a more diverse and inclusive future together.

Schuyler was born and raised in Halifax, travelling to Ottawa for school and work, before deciding his future was in Atlantic Canada. Upon moving home, Schuyler got involved in community outreach, public relations and leadership consulting. He has represented various non-profits in the Atlantic Region, recruited foreign-trained doctors for the province of Nova Scotia, and managed communications for various post-secondary institutions in the region.

Schuyler has a BA in Network Communications from the Université d’Ottawa and a Certificate in Diversity Leadership from Centennial College.

When not out hiking in the forests and shorelines of Nova Scotia with his dog Ruby, Schuyler can be found playing boardgames with friends, painting, baking, volunteering with community organizations, or tending his growing indoor forest of plants.