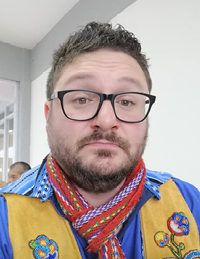 Roy Pogorzelski is Métis from Saskatchewan and his family comes from the communities of Green Lake, Meadow Lake and Batoche in the north. Roy spent 4 years with the City of Lethbridge as the inclusion consultant representing the Canadian Coalition of Municipalities Against Racism and Discrimination (CCMARD) initiative and the Vibrant Lethbridge’s poverty reduction initiatives. Roy represented Lethbridge at the Cities for All Woman’s Initiative and assisted in collaborating on the creation of a National Equity and Inclusion Guide for Municipalities, which turned into an Inclusion Policy for the City of Lethbridge in 2016.

Roy also co-chaired the Reconciliation sub-committee and was instrumental in the creation of a Reconciliation Implementation Plan (2017-2027) for the City of Lethbridge in response to the TRC Calls to Action. Roy was also selected to represent UNESCO Canada at the International Coalition of Cities Against Racism and Discrimination (ICCAR) for meetings on inclusion in cities in Nairobi Kenya. Roy is also very involved in the community sitting as a former member of the U of L Senate, as a Board Member with the YMCA Lethbridge, President for the Rotary Club of Lethbridge Mosaic, former board member of the Board of Directors with the Chamber of Commerce, appointed to the first Alberta Anti-Racism Advisory Council and is an appointed Board of Director for the Canadian Race Relations Foundation (CRRF) and sits as the CRRF advisor to the National Coalition of Inclusive Municipalities committee.

Roy is also very involved in business owning and operating Pogo Bros Inc, which operates the Oktoberfest YQL festival and his own consulting company RWP Consulting.

In 2016, Roy received a Human Rights Champion Award from the John Humphrey Centre for Peace and Human Rights, in 2016 his business Pogo Bros Inc took home an award for best event/festival of the year for Oktoberfest YQL from the Best of Southwest Tourism Awards, in 2017 Roy was awarded a Friends of Diversity Award from Diversity Magazine in Calgary, in 2017 CMARD Lethbridge was awarded a “From the Heart Award” from the Downtown Awards for their work in creating a welcoming and inclusive downtown, Roy was named the overall winner of the Top 40 under 40 by the Lethbridge Chamber of Commerce and in 2018 was awarded an outstanding dedication award to students by the University of Lethbridge Student’s Union.

Roy has worked in business, non-profit, government, internationally and as a consultant. He has a Bachelor of Arts in Indigenous Studies and a Bachelor of Human Justice from the University of Regina and a Masters of Science in Cultures and Development Studies at the Katholieke Universiteit of Leuven in Belgium. Currently, Roy is an Associate the Canadian Centre for Diversity and Inclusion while working on his PHD at the University of Lethbridge where he is also a sessional instructor for the Dhillon School of Business and Indigenous Studies Faculties.